I’ve been thinking a lot over the past couple of days about the places I’ve lived. I move a lot – always have, ever since I left home for college – and now that I have a toddler and a new baby on the way, I’m thinking about what it would mean to settle down. To really. Settle. Down. 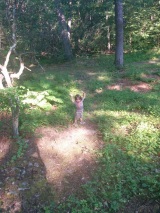 One of the things it means is embracing a place. It means becoming entangled in that place in a way that I haven’t been since I lived with my parents. Places have character, soul, even in today’s increasingly homogenized and globalized world. You can’t take the Puritan out of Connecticut. You can’t take the aristocracy out of the Deep South. Appalachia remains rugged, self-sufficient, and independent. In DC, power is critical and yet inaccessible. While those things are small snippets of the soul of these places, they are there, and they do matter, surprisingly enough.

For the past 11 – almost 12! – years, the average time I have lived in an apartment is probably a bit less than a year. The longest time so far has been about 18 months. I think we might hit 2 years in our current apartment.

The brevity of time I’ve spent in these places has prevented me from really putting down roots anywhere, at least as a fully independent adult. It has also allowed me a comparative look into the souls of these places. You can’t get that in a week’s vacation. A few months in, you begin to feel its character and sense the pattern behind the bustle of everyday life. By a year, the soul has revealed itself, made itself apparent. Then, I get to move and learn about a new place.

The apartment I live in now, quite apart from closing in on the distinction as the longest place I’ve lived in 12 years, is also the biggest place yet, with two roomy bedrooms sporting walk-in closets and a nice long entryway that I’ve hung with pictures and trinkets. It has been quite nice to live in a place where we are close to a network of support – my husband’s family – but still get to make up our own little space, hideout, and routine, with plenty of breathing room. Still, nearing 30, I begin to long for a backyard to grow a garden with perennials and vegetables, a fire pit for fresh, early-fall evenings, a big kitchen to dry herbs, a garage with a workshop so I can engage in some fickle dabbling in woodworking and fixing things, according to the dictates of my tyrannical whimsy.

So now we consider: where will we set down roots? Where will my sons come of age? With what place, with what great and flickering soul of a place, will we enter into this sacred compact?

Perhaps I’m being a bit melodramatic. But to me, this feels just that important. Because this is something different from my habit. I specialize in a year-long character study, living in an apartment and scoping out the wildlife at nearby coffee houses and church basements. This, though…this is a commitment. It’s like getting married.

It’s a privilege to be able to choose, of course, just as it’s a privilege to have chosen my own husband or to have birthed a kid. I think that makes its weight heavier, not lighter. And just as getting married or having kids means letting go of one life in exchange for another, this decision, regardless of where we choose to go, is as deeply sad as it is exciting and important. I must let go of the possibility inherent in every other place-soul and commit to just one. It’s no more or less than any of us do, and it is full of hope and potential, but I feel the loss of my nomadic ways nonetheless.

And so I will be both joyful and sad, if and when I enter into this compact. It is no more or less than any of us can ever really be, when you think about it.

One thought on “The Soul of a Place”

Voracious reader, insatiably curious, trying to be of service by relaying findings to the world.